The North Texas polo club began its first season on campus as a member of the United States Polo Association (USPA) with a match against the Texas Christian polo team this past weekend.

While this is the first season for the polo club, it has not had trouble obtaining talent with one of the members of the team having national experience.

“I won the high school national championship, and there are not many players that have done that,” sophomore Vaughn Miller Jr. said. “I’ve got a strong pedigree and have played my whole life.”

Miller Jr. also played polo professionally and was a big factor in pulling in other players for the North Texas club.

“I was playing professionally in Michigan, and I met Andrew Scott and Turner Wheaton who were also playing there and recruited them to come to UNT,” Miller Jr. said. “They’re both really good.”

As a part of the USPA, the North Texas polo club is one of more than 60 college polo teams that compete. The club recently competed against and won against the Texas Christian polo team and will compete against the top-ranked Virginia Cavaliers. Later in the season, North Texas will take on a highly ranked Colorado team.

Polo is played on a 300-by-180-yard field with two goalposts on each end. There is no goalie, and the objective of the game is to put the most balls through the post.

With all the equipment needed to compete — including horses — polo can be quite expensive.

“You have to have boots, a helmet, a mallet and a horse, and it all can be pricey,” Miller Jr. said.

Despite the potential economic burden of this sport, the North Texas polo club is able to fund all of this through their head coach Vaugh Miller Sr., who owns Prestonwood Polo Club. Most polo clubs at other schools require their athletes to play out of pocket.

“We are very fortunate to have a coach who runs so many different aspects of this sport,” sophomore club president Turner Wheaton said. “With all that funding, it makes it more easily accessible for us to participate in. A lot of university polo clubs can’t offer the pricing we can because we have so many outside sources of funding.” 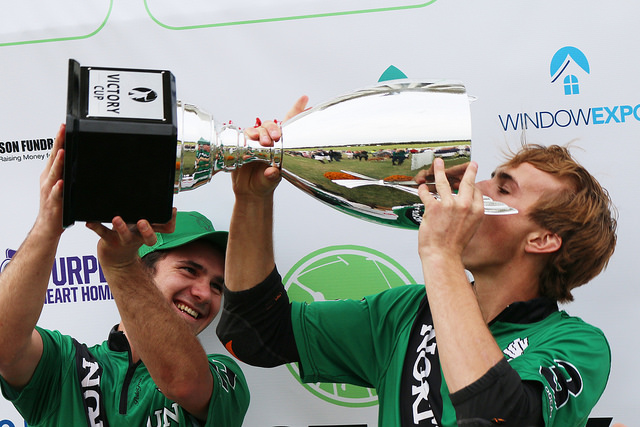 The team also receives funding from the Texas Christian polo team, who also practice at the Prestonwood Polo Club.

Sophomore Andrew Scott expressed his gratitude for his family and Miller Sr. for their financial commitment toward the sport of polo.

“I got a lot of backing from my dad, and then out here at college from coach, so things have been pretty easy going for me,” Scott said.

Wheaton said polo is not a common sport around Texas and the rest of the country but that the sport is unique in its own way.

“[Polo] is hockey on horses,” Wheaton said. “It’s a contact sport. You can’t hit people with your mallet or anything, but the horses can hit each other.

The North Texas polo club prepares for matches with frequent practices to get used to the equipment.

“We have a lot of scrimmaging against each other and the varsity high school team they have out here,” Scott said. “They’re very good. We just have a lot of playing, a lot of riding [and] a lot of working with the horses [and] with the ball and mallets.”

Another aspect that sets polo apart from similar sports is the athletes rely on an animal to play the game. This can make mastering the game more challenging than other sports.

“It’s just spending a lot of time on [horses] working out the kinks, making them stop how you want them to stop, accelerate at the rate you want to, push their top end speed and turn,” Scott said.

Scott said polo is a sport that requires more than just talent, and it typically can’t be picked up and perfected quickly.

“Some people when they start are kind of naturals at it, but it just kind of depends on the person,” Scott said. “If you have an athletic background then you tend to be better than people who don’t from the get-go.”

With the professional polo experience and overall pedigree of some of the members of the North Texas polo club, there is a sense of optimism surrounding the team and their first season.

“There are established programs out there that have recruited new members, and they’re all going to be pretty good, but we think we have the extra edge on them,” Wheaton said.

The expectations are high for the North Texas polo club. Between athletes’ professional experience, a coach capable of funding the program and their victory over Texas Christian, Miller Jr. said the club can accomplish feats at the national level.

“No one really knows about us,” Miller Jr. said. “We’re kind of a sleeper, but we’re going to be a really strong team, and I think we’ll win the regional tournament and be a competitor in the nationals.”